A story about the promise to a mother

Once upon the time, in a village, lived a mother and a daughter. They were every poor. In this same village there also lived a very rich man. He was a chief in the village. He was a very bad chief. The people who lived in the village hated him, but they couldn't do anything to him. The poor people were forced to work in his fields. He paid them so little. They had to work all day long.

The girl's mother had to be the chief's employee also. She too had to work all day long. When she got home she was exhausted. Most time she fell asleep as soon as she arrived home.

Before the rich man had come to the village the girl's mother would take the girl on her knee and tell her stories. Now the mother never really had time to talk to her daughter. The daughter had not heard story from her mom for a long, long time. She missed these stories. She had not talked to her mother for such a long time. The girl felt pity for her mom. She knew that her mother was tired. But secretly she really wanted to hear a story from her. Also she had a lot of questions to ask. The mother had made plans to send the girl away to school to study and get an education. She wondered why. She wanted to know and she asked her mother many times.

One day when her mom was not feeling well and could not go to work, she called her daughter. She sat beside her mother and the mother told a story to the daughter about two birds. The mom said, "Once upon a time there were two brother birds that lived in a nest.

They couldn't fly well yet. One day their mom went to look for food for them.

A storm came. The wind blew hard. It blew so hard that the young birds were thrown from the nest and they were separated.

Now she understood her mom's story and she could see that her mother loved her enough to send her away so that she might have a better life. 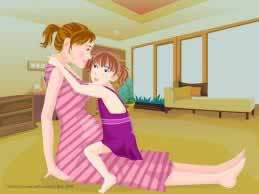