The Unicorn Named Wild One

This story begins a long time ago in the 1800's and takes place in a beautiful meadow. There were high mountains surrounding the meadow.

The people in the village often told tales that something evil lived in the meadow. The people told tales of mysterious creatures. People from the nearby village were frightened by the tales. Most would not go into the meadow.

There was only one person; Chloe was her name, who did not fear the stories. Her grandmother had told her about the strange creature that the people feared. She had told Chloe that this creature was special and only people who believed would see it. Her grandmother had called it a unicorn. Chloe remembered this story. She would go to the meadow and to look for the unicorn but she had never seen it. But she believed in it. One day Chloe was in meadow walking. Once again she was looking for the unicorn. As she walked she saw something from the corner of her eye. She turned to look and there it was the unicorn.

The unicorn had a beautiful white coat. Its long mane was covered with gold dust. His wings looked like they were on fire. When Chloe saw it she remembered something more from Grandmother's story. The unicorn's horn was said to have magic powers. Grandmother had said that if a person touches it she would receive three wishes.

Chloe looked at the beautiful unicorn. She slowly walked toward it. She reached out her hand and stroked its mane gently. The unicorn knelt and allowed Chloe to get on its back. Together they rode to the village.

When Chloe's mother saw them she called out, "Get off that wild thing!"

Chloe said, " No! It's not wild mother. All that he needs is a friend. He needs some love. Mom, come for a ride with me?"

Mother said, "No, Chloe! We don't know anything about him. What does he eat?"

"He eats grass. Grandmother told me about him when I was young. She told me that I could make a wish if I touch its horn and that the wish would come true.

Chloe touched its horn and she made a wish. She wished for a castle. Suddenly the castle appeared. It had solid gold trim. The ballroom floor was made out of pearls. The pillars were solid gold.

Chloe wished a second time. This time she wished for more unicorns so that her unicorn could be happy for the rest of his life and then there were more unicorns walking and playing in the meadow.

Chloe' mother was so happy that she could have all the things that she wanted in her life.

Now they could live happily ever after, and they did. 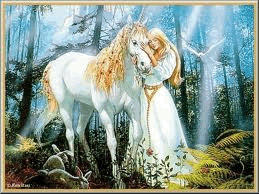