A Clever Rabbit and a Witch

A Story about a clever rabbit and a witch

A long, long time ago, there was a rabbit that lived in a beautiful mountain. He was a happy and clever rabbit. His best friend was an old eagle.

Also there on the mountain was a witch. The witch liked to eat children. She would always go outside to search for her food.

One day as the rabbit played at the foot of the mountain, he saw a lady crying. She cried so that the rabbit felt pity on her.

The rabbit run to the lady. "Mamma, what is the cause for your crying? "

The lady couldn't stop crying, "I went to the mill an hour ago. When I got back my baby had been stolen. I can't live without my baby." She continued crying.

"Don't cry." said the rabbit. "My friends and I will try to find your baby. Quickly follow me."

The rabbit was pretty sure that was the witch had taken the child. He was afraid of the witch had eaten the baby already. He hoped they were not too late.

The rabbit found the eagle quickly. He told the story to him, He asked the eagle to help him search. The eagle flew off. Just a few minutes later, the eagle came back. He had found the baby. The witch had put him in a cage and hung it up in the tree in front of her house. The eagle also told the rabbit that the witch was getting ready to cook so they must hurry, otherwise it would be late.

The rabbit run to the witch house as the eagle followed in the air above. They saw smoke coming out from the witch's house They knew she was about to start cooking. The rabbit was so worried. Suddenly he got an idea. He shouted, "Witch! Come here, I am going to dance for you."

The witch didn't want to see the rabbit dancing. She said, "Don't bother me, I am busy cooking. I have no time to watch you dancing. I want to eat my delicious food."

The rabbit didn't give up. He shouted again, "Witch, I learned a new dance. It is really good. Come here. I will show you my new style dance. The time is still early. It is not late. After you finish watching my new style dance you will have lots of time to eat. Come, Witch!"

Finally the witch came out of the house. She watched the rabbit dance in her backyard. She laughed and she laughed; she forgot her lunch.

After a half an hour, the witch suddenly remember her cooking and she said, "Rabbit, stop dancing. I must continue cooking." And then back into her house, she went. She found that cage was no longer in the tree. It was then that she became aware that the rabbit had played a trick on her. The baby had been taken away while she was watching the rabbit's dancing. She was really angry and went back into the yard to find the rabbit, but the rabbit had already gone. "Well, young trickster if I ever get hold of you I'll eat you." screamed the witch.

The eagle had taken the baby home while the rabbit was dancing. The lady got her baby and she was so very happy.

The witch was so very angry. She tried to find the rabbit everywhere. But she could not find him. Until one day, she heard a drumming sound coming from the mountain. She ran toward the sound. There she found the rabbit playing the drums.

She cackled loudly "I found you at last. You will be sorry that you tricked me and stole my lunch. Now you will be my lunch."

The rabbit pretended he didn't understand the witch said, "What are you talking about? There are hundreds of rabbits on the mountain. It must be another rabbit, I am a good rabbit."

"Where? Where are the others?" the witch asked.

The rabbit pointed to the big hive in the tree, and he told the witch, "That is a new drum.

Hit it hard. When the rabbits hear the sound, they will come out."

The witch believed the rabbit, and took the drumstick. "Ready," the rabbit told her, " I'll say one, two, three and you begin to hit the drum." Then the rabbit ran far from the tree, and loudly shouted, "One, two, three, begin."

The witch hit the hive hard. You know what happened then? A swarm of the wasps came out. The witch couldn't hide anywhere. The wasps stung her. She screamed and run away. She was never seen again. 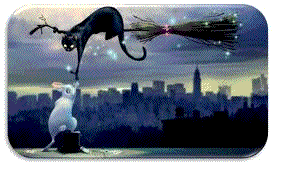