Story about the carnival and the animals

The children and I saved our money. When August came around we went to the carnival at the Exhibition Grounds. We were excited. The children wanted to see all the animals at the carnival. They wanted to see the tigers with their two-colored coats, the elephants, the bears, the wolves and the unicorns.

I was surprised that he was talking to me. " I - I think you look like Tigger because of the way you walked and pounced off the stands. You remind me of the cartoon of Tigger. You pounce like he pounces in the forest.

Just then the two young tigers, the ones that were white and black, started talking to JD. "It must be nice to have freedom. You are out in the world. You are not stuck in a cage and made to go from town to cities."

JD looked at the tigers and said, "Yes it is nice to be free. But still it must be nice to travel. We don't travel around much to different cities or towns."

The other orange and black tiger started to talk toward Brenda, "Are you having fun looking and talking to all the animals?"

Brenda replied, "Yes, we are having fun. But we haven't seen all the animals yet." I heard my daughter's conversation and said, "Come let's go see the bears and then the elephants."

We said goodbye to the tigers and we walked on to see the bears in their cages. After, we went to the elephant's cages. We stopped and talked with the elephants. We asked the elephants how they liked being in the carnival and how old they were. One elephant said that she was about fifty years old and the other one said he was about twenty-five years old. They said that they had been in the carnival for all of their lives. Our next stop was at the wolves. We all like wolves so once again we stopped to talk with them. The wolves talked to JD and Brenda. They told us that they had only been in the carnival for a few years. They were surprised to see how many people like to see the different animals. But they were sad that not many people stopped to talk.

"So, do you guys like us?" the wolves asked.

JD and Brenda said, "Yes of course. We like wolves very much. But we are sorry we can't stay and talk longer. It's getting late and we still have to go to see the unicorns. They are the most beautiful animals of all. Thank you for talking with us. Goodbye."

Off we went to see the unicorns. The unicorns had over heard the children saying that they thought that unicorns were such beautiful animals. Before anyone could say anything, the unicorns thanked the children. "You know many people do not believe in us and because of that they can never see us."

"Oh we believe in you and we find you to be the most fantastic animals. But it's so late now and we have to go" JD, Brenda and I thanked the unicorns. As we started to leave, the unicorns called out to the other animals, "Let's all say good bye."

One unicorn said, "I will count to three and we will say good bye." And he began to count, "One, two, three."

And with a loud noise that almost sounded like thunder, all of the animals said good-bye and good night.

It had been a very special day for us. We had often talked to the animals but this was the first time that the animals had talked to us. 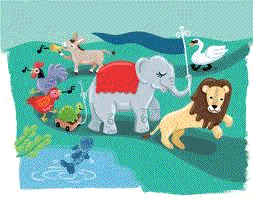