A story about the ugly prince

As time went by, the princess grew up. She became more beautiful with each passing day. Her father, the king, thought hard about his daughter's future. The king wondered what he would have to do.

All the people were excited. When Peter heard the news, he wanted to go to the archery tournament very much. He was very good at archery. He was so excited about the tournament that he couldn't drink and he couldn't eat. When he went to sleep, he dreamed about it. When he awoke, he thought about it. He was excited.

At the same time he was sad, too, because he was so small and ugly. His grandmother asked him why he sounded so sad. All he did was sigh and answer, "I'm okay; grandmother."

His grandmother knew that he was sad and she asked him again and again.

Finally he explained to his grandmother that he had heard the news about the king's tournament. He told her how he felt. His grandmother said, "You are good at that game. Why don't you try it?"

"I know I'm good at archery, but maybe some of them are better them me."

"Don't give up." his grandmother said, "You can do it" Peter said to his grandmother, "But if I win the game, I don't think princess would marry me."

His grandmother told him; "It doesn't matter if she marries you or not. Just try to be as good as you can at the games."

He thought for awhile. Suddenly Peter said "You're right grandmother. I will try it."

Peter trained himself. Soon he was ready for the game. On the day of the games he got ready to leave for the castle early in the morning. He wasn't happy about leaving his grandmother alone. He was worried about her. But his grandmother told him he had to go. Before he left, his grandmother gave him a red rose. "After you win, give this rose to the princess. But before you give this to her, close your eyes and smell it's beauty. Be strong and be brave and win the game."

He said good bye and left his grandmother and went to the castle.

When he arrived, Peter saw the big castle. There were many people there. He was afraid to go in. Peter thought and thought. He almost went back to his grandmother and then he heard his grandmother's words again. Peter knew he could not turn back. He went across the castle's bridge and through the castle's large gate.

Inside he saw even more people. There were soldiers all around him. He was so afraid. Everybody was excited about the game.

Peter stood in line waiting for the game to start. He felt that everybody was looking at him strangely because he wasn't a prince or a knight or anyone important. The buzz of shopkeepers selling their wares and people talking and guessing who would win filled the streets. What kind of person was going to marry the princess? Would it be a knight or perhaps a prince?

There were many excellent archers at the tournament. Peter nervously waited for his turn. Finally the judge called his name. Peter stepped forward. He placed an arrow on his bow. He pulled the string, aimed and released the arrow. It flew through the air and it hit the target.

The crowd gasped. Peter looked and he could not believe it. Peter had been lucky. He had won the prize. Nobody thought that Peter was going to win.

Slowly Peter walked to the front. He stood in front of the king and the princess. With his eyes looking down he offered the rose to the princess. But before he gave her the rose, he smelled its beauty, just like his grandmother had told him.

Magically, Peter turned into a strong, tall and handsome man. Everybody was surprised, including the king and his daughter. Peter and the princess married and lived happy ever after. 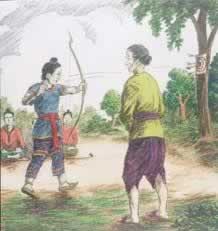