The elf and is friends

A story about an elf and is friends

One day there was an elf walking on a forest path. As he was walking, he came upon a person named Mat. Mat asked the elf, " Where are you going?"

The elf said, "I'm going down the path."

"Sure," said the elf, " but beware, the bush is really wild, the grass is pretty high and the water is very deep! Do you still want to go?"

Mat said, "Well, if you put that way, I guess I'll change my mind. So the elf left. Mat really didn't trust the elf so he decided to follow him. In a very short time Mat saw that the elf had tried to trick him. The grass was not high and there weren't any wild bushes and the water was not deep at all. The elf just didn't wanted Mat around at all.

Mat jumped out from behind the bushes and said to the elf, "You tried to trick me. Why didn't you let me come with you?"

The elf felt badly and he told Mat that he was sorry. He asked Mat to come with him and the two kept on walking. They walked until they came to another guy named Brian. Brian asked them where they were going.

The elf said, "We are going for a walk in the forest. Would you like to come?"

Brian said, " No thank you. I hear from Mat's friends that the bushes were wild and the grass is pretty high and the water is pretty deep."

The elf replied, "I just told him those things. But really they are not as bad as I said they are. You can ask Mat yourself. This is Mat."

The elf said, "OK with me. We'll go ourselves. Don't say we didn't ask you come along for the walk."

Mat and the elf went off into the forest. They were hungry so the began to search for some food to eat. As they were looking, they ran into Larry. He asked them, "Where are you going?" "We're going to the forest for a walk. Would you like to come with us?" asked the elf.

Larry said, "Yes, I would like to come with you. How far are you going?"

"I would like to come with you. I'm going by myself and there is not going be anyone around to talk to."

The elf said, " Together we can explore many wonderful things. We three can enjoy our walk together. It's much better to do things with friends than it is to do things alone." To this they all agreed and so off they went together. 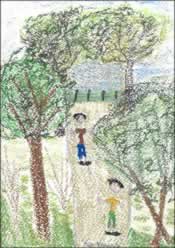