A story about bubbles cup boats

Once upon a time there was a sailboat named Troy. He always tried so hard to do his job right. One day Troy's father came up to him and told Troy that he was going to have a long journey tomorrow.

"Hey! I know who I can take, Shaleisha". Once again he thought about his choice and again he said, "No, I can't take her. She can't carry anything that's heavy; she will probably sink. I really don't know whom I can take. Boy-oh-Boy!'' he said to himself, "Think, think, think! That's what I always do! I'm going to give myself a headache".

Suddenly, his eyes grew bright. He had an idea! "Jessica sailboat! I know she is a girl but she's big and a little wiser than I am. Wow! I'm going to have a wonderful time with her tomorrow. Well, now that I know whom I'm taking, I'm going to bed. I have a long journey." 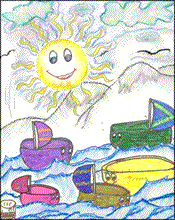 Troy woke up early in the morning. His mother had made him breakfast. "This is so wonderful that you are going to take your cousin with you. But remember, you guys have to be back at eight o'clock sharp!" Troy nodded, "Yes mother."

Troy's father gave him the directions before they left. "What are we going to pick up Dad?" said Troy. Troy's dad said, "You two are going to pick up some of your sister's doll clothes at Lake Moon Light, south of Meadow Land Park."

So the two sailboats started out. They waved, "See you guys this evening." Father waved to them, " You two have a good time sailing there."

As they were sailing south, they saw big mountains and birds flying above them. Jessica sailboat had idea, "What if we go through a short cut so that way we could be back sooner and have free time when we get home. What do you think Troy noodle?" Troy said, "That sounds good to me."

By the time they got to their uncle's place they were so tired, they needed some rest. So they decided to visit their cousins for a while.

Then Troy noticed the time and told Jessica Sailboat, "It's time to go now. We have to be back at eight o'clock, remember?"

They had no time to waste. This time they couldn't use their sails if they were to make it home on time. They started their motors up and waved back to their cousins, "We'll see you two soon."

Together they chugged along and they arrived home on time. Troy gave his father the clothes and his father said, " You have done a good job. Your mother and I are proud of you. Thank you."