You will learn what simple future tense is and the different ways that you can use it. The next part of the lesson describes how you can use ‘will’, ’verb be’ and ‘going to’ when you speak or write sentences.

What is simple future tense?

I am going to watch a football this afternoon. 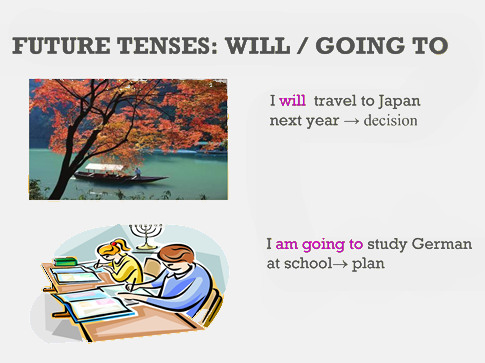 I will see you soon.

I will open the car door.

You will finish before me.

I’m going to finish my drawing in thirty minutes.

You are going to party tonight.

Are you going to party tonight?

You are not going to the party tonight.

Future tense can also be used to predict the future, you can use either be ‘going’ to or ‘will’.

It is best to use going to, when you are talking about something that has already planned, or as been decided.

I'm going to eat at a restaurant later. Want to come with me?

What’s the difference, between will and be going to?

Will and be going to, can be used, when talking about predictions and guesses.

My new car will be here next week.

My new car is going to be here next week.

Going to is used for strong intentions or for describing the inevitable.

I’m going to give Mr Bean a good telling off for being late.

There’s no way Liverpool can score two goals in one minutes. We’re going to win again!

Will is best used when making offers or expressing decisions.

Mr Bean: - Who will help me paint the living room?

Mrs Bean: - Of course I will help you dear.

When using future simple tense in speaking, it’s often contracted with the subject and auxiliary verb:

Wait, I’ll get a something to eat for you.

We’ll go out and have a drink tonight.

He’ll be back home later

For negative sentences in the future simple tense, we contract like: - will not = won’t

You won’t learn English if you don’t try harder.

She won’t be back till later.