What will I learn from the lesson continents of the world?

During this lesson you will be learning what a continent is, how many there are, and what they are called. The last part of the lesson shows some facts about each continent

What is a continent?

A continent is a one of the several main land areas on the Earth. Below is some facts about continents:

What are the seven continents?

The 7 continents in alphabetical order. 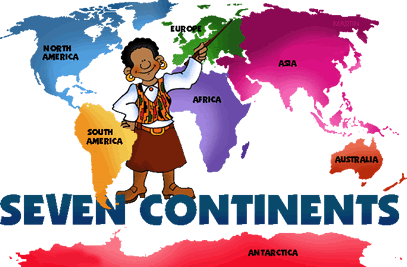 Interesting facts about the seven continents

Has the world's longest river which is called The Nile.
The world's largest desert named the Sahahra.
Africa has more countries than any of the other continents.
Almost all of the world's gold and diamonds have come from Africa.

At one time Europe has ruled almost all of the rest of the world.
Europe has been the starting point of both the World Wars.

Is also joined to Asia but only by ice in winter (Bering Sea).
North America is the only continent that that is completely in the Northern and Western Hemispheres.
Has the world's tallest mountain which is names Mount Kea.
Contains the world's largest fresh water lake named Lake Superior.

Has the least countries, which are Australia, New Zealand and Papua New Guinea.
There are  more sheep than people in this continent.
Oceania is the only continent that lies entirely in the Southern and Eastern Hemispheres.

South America has the world's Southern most city, which is called Puentas Arenas.
Has the world's largest river system and possible most famous (The Amazon).

Lessons that are related to this one

To view a lesson just click on the link.

where are you from? learning English