Telling a doctor or nurse what is wrong English lesson

Learning to tell a English doctor or nurse your problem

During the English lesson you will learn about how going to the doctor or nurse and telling them what your symptoms are. There are examples of what symptoms means and the different types of symptoms you may have.

What does the word  'symptom' mean?

Symptoms are any feelings and signs of illness or discomfort which are caused by a illnesses.

Going to the doctors and telling them your symptoms

When you see the doctor he (or she) might ask you 'What's is wrong with you?' or 'What's is the problem?'

After you have told him the Doctor will might ask  'What symptoms are you having?'

An example of a symptom

Mrs Smith had flu her symptoms included, a fever, a runny nose, she told the doctor she had been coughing and sneezing a lot.

The doctor might also ask 'When did the symptoms start?'

If you have a pain inside your head 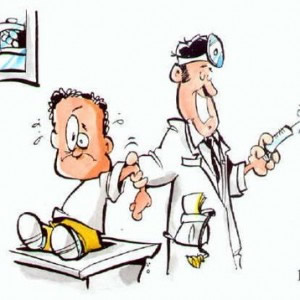 Mrs Jones had a headache and was unable to go to the party.

Mrs Smith told the doctor that her head aches.

Mrs Smith told the doctor her head had been hurting all day.

I have been having headaches for a while now.

Mrs Smith had a bad head and decided to go to the doctor.

If you have a pain inside your stomach

'Mr Smith told the doctor he had stomach ache.

Mrs Smith told the nurse her stomach aches during the night.

If your back was hurting you say I've got backache. or that my back aches.

Mr smith's back started hurting after he had been going to the gym, he told the doctor the pain was in is lower back.

Mrs Smith had a bad back and was off work for a while.

Mr Smith had to go to the doctor because is neck hurts when he arrived he told the doctor that he had got neck ache.

Mrs smith told the nurse that her neck aches.

You would alter this for the  other parts of your body that were hurt, leg, arm, lips, foot and toe. 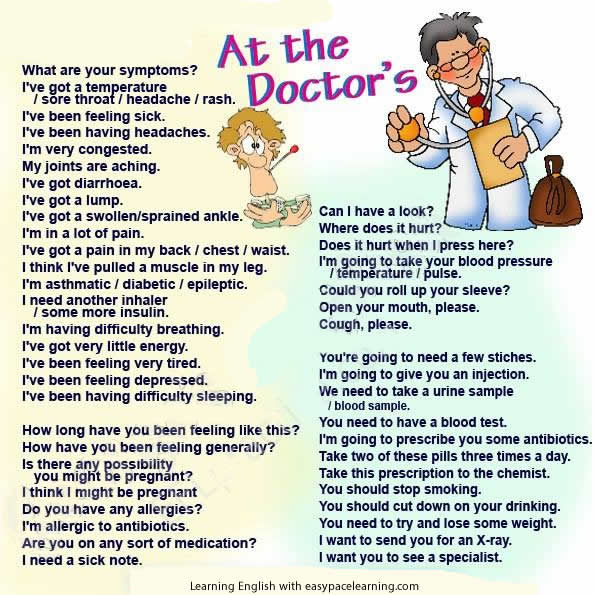 Explaining what your problem is to a doctor or nurse

Mr smith had flu and went to the doctor.

Hello, Mr Smith can you tell me what your symptoms are please.

sure, since last week I have been coughing a lot.

Other ways to explain  (coughing for a while and still coughing).

Sometimes English people will say "I feel followed by an adjective"

Lessons that are related to this one

To view a lesson just click on the link.

Tell a doctor or nurse your problem English lesson

Health and talking about it English lesson